From MaxCard
Jump to: navigation, search

Personalization of a card is made when it is necessary for it to bear any unique information regarding the owner, product or service which it offers. The personalization makes avery card unique and binds it with the bearer, for example badges, cards for loyal customers, business cards, or with the system for which it is intended – promotion cards, cards for discounts and many others.

The digital offset print is used for making small circulations of cards – up to 3000 pieces. In this case the cards are personalized at the same time with the printing of static image. They may be personalized as with numbers, barcodes, names - as well as with color photos. It is used at making badges, ID cards, discounts or loyalty cards. A great advantage of such personalization is that it allows better data protection of scratching and scrubbing as everything stays under the protective layer of laminate. This guarantees better durability of the personalized data.

Technology for printing of cards at which the image is put on the card as is taken by special stripe. If the image is full-color then are used stripes with the four colors basic for the printing - cyan (C), magenta (M), yellow (Y) and black (K) - CMYK. The thermal printing is made with sublimation printers.

Magnetic strip encoding. The magnetic stripe of the cards is usually placed on one and the same place no matter of the card type. Its place is fixed on 4 mm of the upper edge of the card. The width of the stripe is not strictly determined but in practice is established width from 12,5 mm. to 13mm. The magnetic strip is organized on three independent tracks for encoding /reading/. Each of them has different capacity and opportunities.

The process of embossed deformation of the plastic cards with characters and digits – compulsory at the credit and debit cards. It is realized by specialized machines /embossers/ on strictly defined places. The embossing is made with alphanumeric symbols on Cyrilic or in Latin. At the emboss-printing is typical that may be available only lowercase letters, while the digits are lower and larger. Usually the so received inscription is colored with silver, golden or other color by tipper.

With embossing can be printed information from database, names, dates, serial, or random number information. The embossing symbols can be seen in the gallery here. There are large digits (OCR 7B)5mm, Cyrillic, Latin and Small Numbers (Standard Gothic)3mm

The barcode is a system for encoding stock units or objects in industry, trade, medicine and many other fields which presents information for the manufacturer and the article and other information. The barcode serves for identification of a particular object and helps for tracing the circulation of goods and the demand of goods. Barcode is also a machine readable marking on the packaging. Most frequently met are the barcodes consisting of digits and different by width vertical parallel lines, which visually resemble a grid. The barcodes are read by optic scaning devices called barcode readers supplied with the respective software. 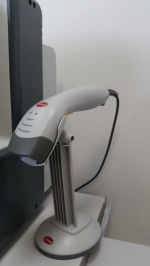 Barcode reader — is a peripheral device which reads the barcode put on the packaging of the good and transfers this information to the computer, cash register or POS-terminal. The bracode readers are used in the trade and services for fast identification of the goods at their sale, storage etc. The barcode contains the specific information for the goods and is put on their packaging still at the production or is printed by means of specialized printer.

EAN-13 consists of 13 digits and has the following structure:EAN-13 may be provisionally divided into five zones. - Three digits prefix of the national organization GS1, by the register in which the production is registered. In this way they mark not the country-producer but the country of registration which most frequently are not one and the same. The codes from 200 to 299 are reserved for internal use of different organizations and do not require registration. Each enterprise in each point of the world may use them by its estimation but only for internal purposes. Their use beyond the enterprises is forbidden. - The following 4 or 6 digits are reserved for the registration number of the producer. The second logical group of digits – this is the code of the manufacturer, enterprise or reseller. If the quantity of digits in this field is bigger then more enterprises may be registered but in this way is decreased the number of articles which may be registered by each enterprise. - 3 or 5 digits: article code The following 3 or 5 digits serve for marking of the article itself. The enterprise is free to number its products in an order convenient for it. - 1 digit: check digit The last remaining digit serves for correctness at reading by the scanner. For representation of digits in the EAN barcode is used a reliable system having high level of security. The first digit of the barcode has special purpose. The remaining 12 digits are divided into two groups by six in each one (left and right). The groups of digits are screened off by so called protective or enclosing stroke patterns. These patterns contain strokes with one and the same width which serve for synchronization of the scanner. The left and right group of digits are enclosed by 3 strokes – two dark ones and one light one between them. The middle group of protective strokes consists of five strokes – three light ones and two dark ones. For one and the same digits on the left (L) and the right (R) side are used different codes. Each digit no matter if it is on the left or on the right side is encoded by means of four strokes – two light ones and two dark ones. Each stroke may have relative width of one, two, three or four units. The total width of the stroke for one digit always consists of seven units. The total width of the whole barcode is always equal to 95 units. In each code are present 29 light and 30 dark strokes.

EAN-8 has smaller sizes than EAN-13, and is respectively used for marking of smaller packagings. It consists of 8 digits. The first three are again for the country producer, the next 4 digits for the article number and finally is the check digit. Its nominal sizes are 26,73х21,31 mm at hight of strokes 8,23 mm and preferred disposition in the back bottom corner.

UPC consists of twelve divisions divided into three groups. This barcode standard does not provide divisions for country. The first group of 6 to 9 divisions is called UPC company prefix. The second group of 5 to 2 divisions conforms to the article number. The last (12-th) division is check digit. (U.P.C.) is successfully used in the supermarkets in America and Canada since 1973.

Code 39 is the first developed alphanumeric symbology. This is the most frequently used barcode symbology because it affords to be encoded digits, characters and punctuations. This is a discrete symbology with variable length. Each symbol at Code 39 consists of 5 lines and 4 blank fields. The encoding of each sysmbol consists of 3 wide and 6 narrow elements. All lower case letters are automatically transformed in capital ones because Code 39 does not support the encoding of lower case letters. The symbol * is reserved for use as symbol for beginning and end of the barcode. The barcodes which contain invalid symbols are substituted with striken out square with the purpose of visual indication of the error. The structure of Code39 mod 43 is the same as of Code39, with added check symbol for data check. The check symbol is sum by module 43 of the values of all symbols. The list of symbols which may be encoded with Code39 includes capital letters from A to Z, the digits from 0 to 9, the blank symbol, the symbols. $ / + % 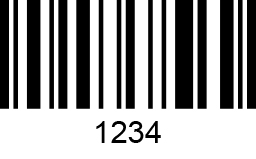 Code 128 is introduced as alphanumeric technology with high density. Since 1990 its use is extended in large number of applications. There is possibility to be adapted automatically when is encoded only digital information or when is encoded alphanumeric information. Because of being very compact this code in its digital version may be always used, and the alphanumeric version is even more compact than Code 39. This symbology is continuous with variable length and is more frequently used instead Code 39, because of the better density and better choice of symbols. The encoding table of Code 128 includes the digits from 0 to 9, letters from A to Z (lower case and capital) and all standard ASCII symbols and check codes. The codes are divided into three types - A, B, and C. For this purpose there are three different initial codes for indication of types. Additionally each type includes check symbols for switching over from one to another type in the middle of the barcode. Type А includes the standard ASCII symbols, digits, capital letters and check codes. Type В includes the standard ASCII symbols, digits, capital and lower case letters. Type С compresses two digits in each position achieving superb intensity.

Interleaved 2 of 5 is introduced as alphanumeric technology with high density based on Standard 2 of 5. It is mainly used at the distribution and warehouse industry. Interleaved 2 of 5 codes each even number of digits in the widths (narrow or wide) of the bars and the blank fields of the barcode. This affords achieving of a little bit higher density.

Codabar may code the digits from 0 to 9, six symbols (-: $ / +.), as well as start / stop A, B, C, D, E, *, N, or Т. The start / stop signs must be used in coinciding couples and can not appear on other place in the barcode. Codabar is used in libraries, blood banks, courier as well as many other applications for information processing. There is no defined check sum as part of the standard Codabar, but some industries (for example libraries) have approved their own standards for check sum. As far as Codabar is self-controlled there is no fixed check digit. If a specific application wants to apply check digit for additional security – such ones may be specified.

QR code (abbreviation by Quick Response) is a specific two-dimensional barcode readable by special QR readers for cameras of mobile phones. The barcode consists of black modules arranged in square pattern on white background. The information in it may be text, URL or other. It is invented by the division of Toyota, Denso-Wave in 1994 and with the entering of smart-phones becomes more popular. QR codes represent matrix barcodes, which have the property to store information which is visualized at code scanning. In order a QR code to operate it should conform to particular structural requirements but they also allow its easy modification (for example to be changed the colors only if there is contrast between two colors, forming the QR code, to be put a logo etc. The applications of QR codes are endless. The consumers may scan the code in order to learn more for a given product, to open a given web site or to record information hidden behind the code.